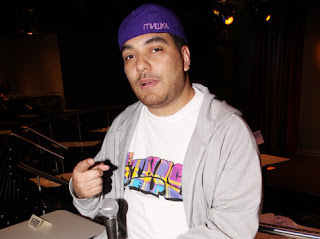 Recently Hot 97 morning show DJ Cipha Sounds made a very tasteless joke. Apparently he said he "stays HIV-negative because he does not mess with Haitian Girls." The Haitian community did not take too kindly to his comment and began to rally at the radio station's location down on Hudson street. This prompted an immediate back handed apology from cipha sounds, real name Luis Reyes. He stated, "REALLY The reason why I am apologizing is because people who never listen to the station called and said Rosenberg said a tasteless joke...."

That is not an apology. That is basically saying, I am not sorry, I apologize because I did not get caught.

While Cipha needs some education over this whole incident, in this economy is taking the man's job really necessary? Now suspended indefinitely what should the man do for employment?

To be perfectly honest I really don't understand what the hoopla is over. Our society has broken down so much that this has become acceptable. If Reyes were Haitian and said the same thing would an apology have been enough? I know Haitians who talk to each other in worse ways than that. What he said is a reflection of our culture. Do you know how many Haitian people call other Haitian people Ni&&A, B*tch, Hoe, etc, etc. Is it because it was said over the radio that makes it so impossible to accept?

I am just trying to understand here. If built into the Hip-Hop culture is the aspect of "being disrespectful" towards one another is deemed acceptable salutation and greeting as well as acceptable forms of humor why is everyone up in arms?

Change your culture! Change the way people see each other! Rally over a cure for AIDS or a way to solve the problems going on in your country.

No. It seems it is easier to go on a witchhunt.

I am so with you on this one. I live in the middle of this culture (primarily Caribbean) and the language and behavior is set to ASSAULT as a default, so it baffles me when someone is suddenly called out on something like this. "Change your culture" is exactly the answer, and it has to happen from the inside, out.