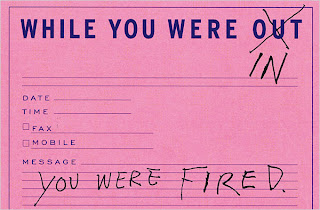 At 33, it was embarrassing to be fired by a 25 year old. I could still remember being 25. I can remember the cockiness of my "brand-new" shit smell. It didn't stink, it was brand new! How could it?

Before Bill Clinton got pre-occupied with Monica and forgot to get Osama. And George Bush decided to go off and spend like he did, and wage war like he had, I had a great job. A job with benefits, a great salary, and I didn't have a college degree. I graduated from High School #7 in my graduating class, a college scholarship, a job to pay my entrance fee into clubs! I had it all. But then the bottom fell out. My family needed me. Like Pavlov's best dog I fetched my ass back home, ate a bowl of shit and liked it. Which eventually led to my having my son, and moving out again. I didn't need college to become a cop.
Then I did. Then I got ENOUGH college to become a cop, and I did that too. But for all the eventual money and benefits, it wasn't for me. My psyche was all wrong. I was hating every minute of my dream job. The only part of being a cop that was good for me, was the look on the face of other people I told I was a cop. I could not go through a lifetime of unhappiness because of what other people thought of me hearing what I do. With no support system, I left that and tried to go back to the existence I had that I had lived with for so long - Office work. But the workforce had changed. No longer was I the PYT all the executives hoped to be theirs. No longer was I the smart/astute/charming/ assistant. Assistants as an occupation had change. Technology had changed, in a manner of  a few short months, you had to become part IT guy in order to be considered by the same standard for which I had just left a few short months before. Now there were 23 year olds fresh out of college that had a piece of paper under their belt that I did not which made them that much better than me. They were my supervisors, and now the way I did my job was not the right way to do it. It is not the way THEY THOUGHT it should be done, no matter how well it had worked for me in the past.

Then the day came. The day when the old was let go. The humiliation of knowing you were let go from a job clings to you. It chokes you with fear every time unemployment forces you to apply to some where. You wonder how young are the people there and what will they say when they let you go? It's humiliating to be out of work so long, one glance at your resume and a person decides they don't want you. By right if you were really half as good as your fluffed up, revamped resume said you are wouldn't you HAVE A JOB already?

Then unemployment tells you to look other places. And again the fear puts you in a choke hold. Could you really be a cashier? After working for years in a private office, playing dress-up and making enough money to sponsor a small village in Somalia, could you really apply somewhere like Victoria's Secret or Macy's and service one of your friends who did not have half the high school top of the class credentials you did, but somehow managed to weather the recession storm by keeping a job in some anonymous business you will never have the satisfaction of running up in unexpectedly as they are doing you when you ask them if they want to apply for your company credit card?

Pride has a lot to do with everything. But there are but so many slices of humble pie someone can possibly eat. So you keep pushing your resume, and vying for unemployment extensions, and hope. You hope for something, somewhere to come through because, now you have gone back to trade school, and while you are not the best skilled worker you do have verification that you are skilled and you can maybe open a business with your new found licensed trade should all go awry. But you HOPE that things go back to normal one day, and you wake up from this financial nightmare in your old suit, at your old desk with your old boss. You hope that they are all still out there, because you would give anything just to be able to go to that time in your life again.
Posted by Anocsanamun at Monday, November 15, 2010