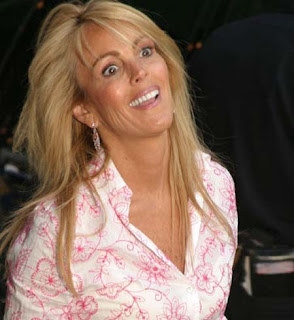 Into every life a little rain must fall. In the case of Lindsay Lohan, there has been a monsoon-a-comin' for a very longtime. Raised by a pack of wolves this poor girl was thrust out into the world as bread-winner for the family in her early childhood. Since her parents, Frik and Frak Lohan were not able to get jobs and raise the ankle biters they created themselves, they put the burden of college for her brothers and sisters on the petite shoulders of Lindsay.
Now that a cocktail of drugs, alcoholism and psychotic disorders have taken a hold of the young starlet Dina does what every bad mother in the world has done before her - blame the system. Recently, in an interview with Matt Lauer - the space-case known as D-Lo skirted around every direct question by blaming the judge for playing "hardball" with Lindsay. Disregarding Lindsay being found with cocaine in her possession and testing positive for it in her system D-Lo harped on the fact that Lindsay got more than 45 minutes in jail, and would be forced to do 90 days in rehab. The sentences "were too harsh" as far as she was concerned and she was looking for a mob to crucify the judge for having the guts to do what she apparently refused to do - reign in her child.

D-Lo you are very lucky ACS does not get involved to take the remaining children in your possession. If you truly love your daughter, get her the help she needs and stop harping on the fact that the judge used blue ink to sign your daughter's court order instead of addressing the real problem:
YOU WERE NOT A GOOD PARENT TO YOUR CHILD AND YOUR DAUGHTER IS PAYING FOR IT.
Posted by Anocsanamun at Saturday, August 28, 2010