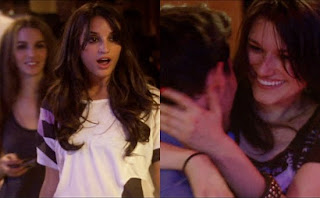 I sat and watched this stupid show out of boredom even after seeing their amateurish, (and not in a cute way), interview on PIX 11 news where they each tried to pitch their boring lives.

Downtown Girls is the wanna be Sex In The City of right now. It would so work, if not for the fact that the cast is lame, and when you remake something you are supposed to improve on it, not drag it into the ground and piss people off.

The premiere episode with Shallon trying to be quirky, and cute on her VLOG came off as corny and fake. You can not even give her pretentious for assuming people are actually watching her vlog because her apparent lack of confidence just has you assume she is trying a leg at sarcasm.

Opening shots of the city identical to SJP's. The up-close shot of Shallon (wannabe SJP)on the laptop, writing her editor to begin the episode with a question?

Then there is the "X BF Garage Sale". Screw it let's call a spade a spade:

Please do me the favor and when you make a new show abide by these rules:

1. Be original. It is a NEW show. Not a "LET ME DIG THROUGH THE CRATES AND SEE WHAT I CAN PUT ON" Show.

2. If you are going to "re-vamp" something do not mimic a show word for word. Take AN idea and expand. Not EVERY SINGLE IDEA.

3. If you are going to blatantly plagiarize something, don't put a new label on it to try to make it new. Just do it. Last night's episode should have given credit to Michael Patrick King somewhere as well as just been labeled SITC. Cah mon! We are all grownups. Put on your big girl panties and take your lawsuit like a woman. Eventually when the movie is faded away to DVD heaven, the girls will be looking for a paycheck.

That episode you will see a close-up of Shallon writing:

Wow... I must have really effed up, huh?
(cue Sex In The City theme music ending)
Posted by Anocsanamun at Wednesday, June 02, 2010

Sent an email to JYNXD624@aol.com. Wanted to make sure you got it. Was wondering if you accept guest posts. Let me know.